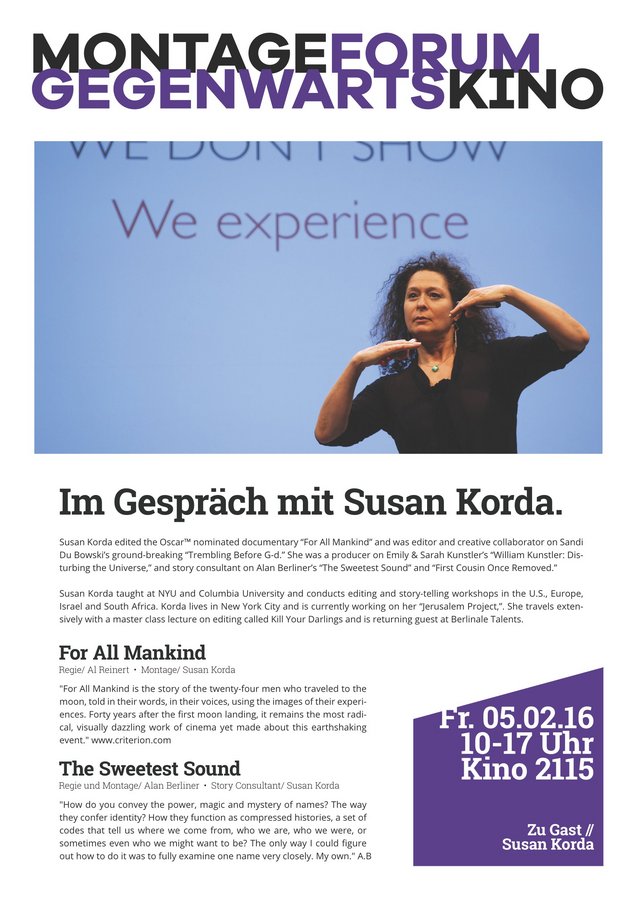 Susan Korda grew up in New York City and Vienna, Austria, where she attended medical school before returning to New York to study filmmaking at CCNY.  She worked as an editor for over 20 years, and attributes the editing room for her creative and spiritual advancement.

Korda edited the Oscar™ nominated documentary “For All Mankind” and was editor and creative collaborator on Sandi Du Bowski’s ground-breaking “Trembling Before G-d.”

She was a producer on Emily & Sarah Kunstler’s “William Kunstler: Disturbing the Universe,” and story consultant on Alan Berliner’s “The Sweetest Sound” and “First Cousin Once Removed.”

Susan Korda taught at NYU and Columbia University and conducts editing and story-telling workshops in the U.S., Europe, Israel and South Africa. She travels extensively with a master class lecture on editing called Kill Your Darlings and is returning guest at Berlinale Talents.

"In July 1969, the space race ended when Apollo 11 fulfilled President Kennedy’s challenge of “landing a man on the Moon and returning him safely to the Earth.” No one who witnessed the lunar landing will ever forget it. Al Reinert’s documentary For All Mankind is the story of the twenty-four men who traveled to the moon, told in their words, in their voices, using the images of their experiences. Forty years after the first moon landing, it remains the most radical, visually dazzling work of cinema yet made about this earthshaking event.

Alan Berliner's uncanny ability to combine experimental cinema, artistic purpose, and popular appeal in compelling film essays has made him one of America's most acclaimed independent filmmakers. The New York Times has described Berliner's work as "powerful, compelling and bittersweet... full of juicy conflict and contradiction, innovative in their cinematic technique, unpredictable in their structures... Alan Berliner illustrates the power of fine art to transform life."

In The Sweetest Sound, Alan Berliner is tired of being mistaken for people who might share his name and decides to rid himself of the dreaded Same Name Syndrome.

"How do you convey the power, magic and mystery of names? The way they confer identity? How they function as compressed histories -- a set of codes that tell us where we come from, who we are, who we were, or sometimes even who we might want to be? The only way I could figure out how to do it was to fully examine one name very closely. My own." A.B.