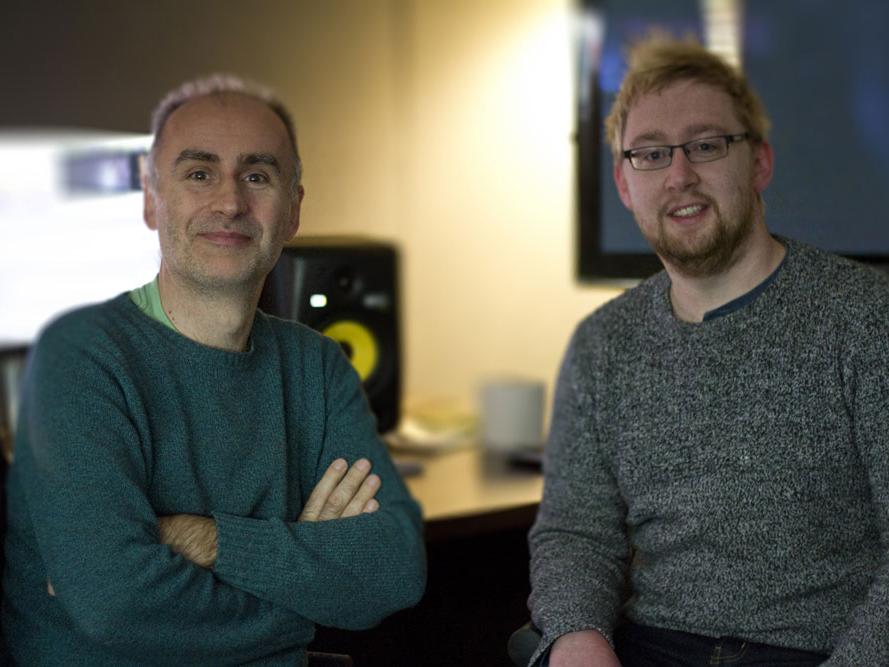 Recently, as part of the ISE Mentoring Program, Dave Thorpe got the opportunity to sit in with Tony Cranstoun ACE and observe his work practices on the feature documentary Songs for while I’m away. Below is his report on those few days.

I got the opportunity to spend a few days sitting in with editor Tony Cranstoun while he worked on  a new documentary about Phil Lynott; Songs For While I’m Away directed by Emer Reynolds. I was very much looking forward to this having been a fan of both Emer and Tony’s work on their previous project The Farthest.

What struck me initially about Tony’s process was how meticulously he logs the footage and prepares before he starts editing. Thick handwritten notebooks of all the rushes that he had watched which really put all the footage clearly in his mind. This went hand-in-hand with the organisation of the tracks and the bins, with each labelled very clearly.

Similar to The Farthest, there is an incredible creative flair to how Songs For While I’m Away is presented. And to watch Tony work you can really see how it all comes to life. Nothing ever feels like it’s just trying to get us from A to B. Archive material, photos, sound effects — everything worked in harmony. Tony was putting in sound effects as he went through the edit, never seeing it as something that is only necessary further down the line but combining everything all at once.
Nothing was seen as secondary. Nothing was seen as B roll.

At one instance Tony played a sequence of GVs that leads out of one chapter of the film. He said to me that “When your gut is telling you something is boring, don’t convince yourself it is actually fine. Listen to your gut.” — The notebooks and hours spent logging came in handy as Tony flicked through the pages remembering a shot that was halfway down the left hand side of a particular book, and instantly pulled the clip onto the timeline. This clip was more frantic, 8mm footage with

lots of camera movement, as opposed to the locked off shots that were in the sequence already. Tony cut out all of the film burns and flickers that would normally be removed from the footage   and put them all together along with numerous di?erent shots he adjusted in speed to create a much more frantic sequence — all the while applying a quick grade and dropping in sound effects as he went along. The sequence went from being a perfectly functional chapter end that most people would say is good, to a sequence that I’m sure most will see and say is great. Tony said to me; “Sometimes you have to go through the boring cut first, before you can find the good one”

Seeing Tony cut down interviews was a fascinating process to watch. Straight away he’s removing any stumbles ‘ehh’s’ and ‘mmm’s’ that the interviewee had, and replacing them with blank atmos from the interview so that he can control the pauses himself. The audio tidy ups at this stage lead to a better foundation of how the interview is broken down — but really something I found interesting was how Tony instantly decides when he doesn’t want to see someone speaking on screen. I’ve always been one to cut down an interview with the picture fully intact and then work with footage that will essentially cover the cuts, deciding at a later stage how much the speaker is on screen. But Tony was making this decision instantly as he was going through the interview.
Removing the video from the timeline. I could see how his process wasn’t just causing black holes in the timeline that he would have to fill, but was much more organic, confident and the rhythm of the scene was formed very early on. He was sticking to the decision his gut was telling him to make and as I watched those scenes come to life over the time I spent in the edit suite with Tony,    I could see how the film was all made so visually engaging.

Tony has a very poetic way of looking at the footage. He looks for symbolism in all the shots and has a very artistic way of thinking. I could see how this was all helped by the level of prep he does beforehand — that he trusts his gut and isn’t afraid to try things out. I could see how this was all making for a much better film. Tony laughed “Mad ideas are good ideas” as he came up with one particularly impressive sequence.

Tony let me listen in on a phone call he made to director Emer Reynolds, and I could really tell how they both very much think creatively to every aspect of the film. There is a great shorthand and trust between the two. Something that struck me was that although Emer had such a strong idea structurally of where certain shots will be used in the film and how it will be chaptered, there was a looseness to it as well. There was a lot of freedom within the edit for Tony to play around with and the strong trust and respect for each other’s roles and creative way of thinking on the project was fantastic to observe.

There are so many little details from Tony’s process that will stick with me that I could never fully get across in these few words. It made me think about my own work and it will really impact my own approach.

I honestly got so much more from this experience than I even expected to. I think as editors, we can regularly keep things very insular without sharing our specific thought processes with one another. Editing discussions can all too often fall into comparing Avid, Final Cut and Premiere without actually getting into the stu? that really matters. It’s perfectly common for actors to learn from one another and grow together as a community. For camera mentorship, directing, etc.
— But editors can unfortunately keep things locked away.

I can certainly vouch for it being a worthwhile experience to see another editors process in action and I would hope that this happens more in the Irish Screen Editors community as it is something I feel all of us will benefit from.

Tony Cranstoun ACE is a multi-award winning editor working in both drama and documentary. The Farthest, his most recent collaboration with director Emer Reynolds was the recipient of two IFTAs and an Emmy Award for Outstanding Science and Technology Documentary

Dave Thorpe has worked as an editor on RTÉ series; Spooky Stakeout, This Is Ireland with Des Bishop, feature film For Molly and numerous short films, commercial and corporate videos. He is currently editing an upcoming sports documentary

The ISE Mentoring Program is open to current members subject to availability of placements. We are currently accepting expressions of interest for both mentors and mentees.