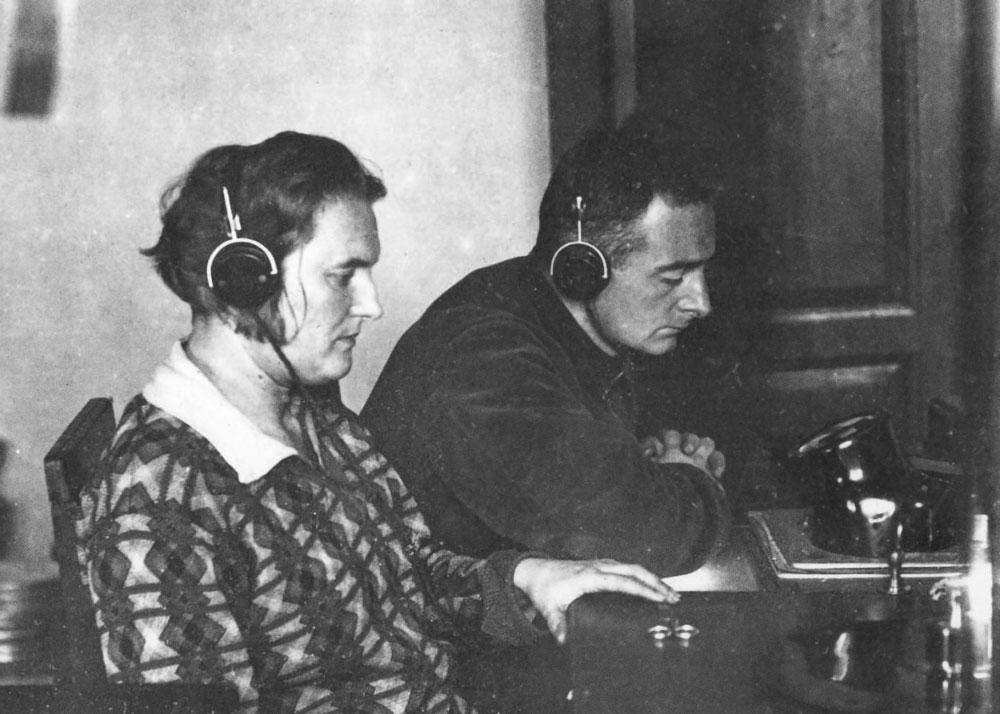 A momentous event in online film culture went mostly unnoticed earlier this year: the unveiling of Edited By, Su Friedrich’s large and invaluable web resource devoted to women film editors. Friedrich, a renowned experimental filmmaker with a body of work spanning over four decades, tells the story of coming upon a film history book, turning to the editing chapter, and finding that each reference to a film mentioned the director—but never the editor. Looking up the cited films on IMDb, she discovered that most of them were edited by women. Out of this seed of curiosity grew the enormous research effort that has now resulted in the website.

Edited By is global in scope, even if the majority of its entries are devoted to American women. Friedrich points to the unjust lack of attention to editors everywhere, contrasting their relative invisibility to the much greater awareness of directors, writers, and even cinematographers that exists in film culture. “It’s time to stop imagining that ‘it’s really the director’ who does the editing,” she writes. This neglect applies to both male and female editors, but it has had a special impact on the latter by occluding the fact that women have a rich but little-known history as editors, especially in American cinema. When the Motion Pictures Editors’ Guild released its list of seventy-five best edited films in 2012, four of the top eight titles were edited by women: Raging Bull (1980, Thelma Schoonmaker), Bonnie and Clyde (1967, Dede Allen), Lawrence of Arabia (1962, Anne V. Coates), and Jaws (1975, Verna Fields).
Elizaveta Svilova

Aside from being so instructive, the website is a trove to get happily lost in, and discover fact upon colorful fact about women editors that would make any cinephile ask: how did I not know that?  Like the story of Viola Lawrence, considered the first woman editor in Hollywood, who wielded the influence to make Orson Welles go back and shoot the close-ups she needed for The Lady for Shanghai (1947). Or that Dorothy Arzner, the only woman director to work for major Hollywood studios from the 1920s to the 1940s, herself spent seven years as an editor of silent films and hired women to edit ten of the seventeen films she directed. Some of these discoveries are distressing, like the unforgivable lack of attention paid to the work of Elizaveta Svilova, pioneer of Russian montage, who edited The Man with a Movie Camera, directed by her spouse, Dziga Vertov, in 1929. Or the historical erasure suffered by Jolanda Benvenuti, who edited almost all of Roberto Rossellini’s films but whose name was substituted by a male editor on the credits of both Rome Open City (1945) and Paisan (1946).

Recent work by feminist film scholars has revealed that women occupied a broad variety of roles in the Hollywood film industry during the silent era. At that time, writes Shelley Stamp, the movie business was “arguably much more open to female filmmakers than it remains today.” According to Jane Gaines, in the period 1916 to 1923, “women were more powerful in cinema than any other American business—to the point that more women than men owned independent production companies in 1923.” Still, despite the significant presence of women entrepreneurs in the industry, an even greater number of women found work as editors, a role that quickly became gendered.

In his book Women Film Editors: Unseen Artists of the American Cinema, David Meuel points out that film editing work in the silent era was not only tedious (given the need to sift through large quantities of filmed footage), it was also low-paying. Because “cutting” was considered menial and monotonous work similar to knitting and sewing, it became common for young women with little or no professional training to be hired as cutters. When male figures such as D. W. Griffith began to emphasize the editing function of cinema through devices like cross-cutting, the perception of editing underwent a transformation. No longer simply a cutter: the “editor” was born.
Anne Bauchens

At the same time as editing acquired prestige in the 1920s, studios expanded in size and movies became big business. With men universally installed at the helm of big studios, women were “systemically purged” (in Meuel’s words) from producing, directing, and editing positions in Hollywood. Despite this calamitous turn of events, editing proved slightly more hospitable for women than producing or directing, and a modest core of women editors survived this transition. Among them were Anne Bauchens, who had a four-decade working partnership with Cecil B. De Mille, and was also the first woman editor to win an Oscar, for North West Mounted Police (De Mille, 1940); Barbara “Bobbie” McLean, one of Darryl Zanuck’s most trusted confidants in everyday filmmaking matters going well beyond editing; and Margaret Booth, reputedly the most powerful editor in studio-era Hollywood, routinely advising MGM studio head Louis B. Mayer on rushes and reshoots.

Still, editors have been under-researched by film historians, primarily because of the mighty influence of auteurism, which has profoundly shaped the study of Hollywood in the last half-century. By centering directors, film history has tended to marginalize other creative artists in Hollywood, including editors. The scholar J. E. Smyth, who has produced an indispensable body of work on women in Hollywood over the last decade, singles out a male editor, Walter Murch, as the exception, given an “auteur glow” thanks to praise from directors such as Francis Ford Coppola and Martin Scorsese. An instructive contrast might be made with a woman editor such as Schoonmaker, who has been held up as a model collaborator (rather than as an auteur figure) by Scorsese, or Sally Menke, who edited all of Quentin Tarantino’s films from Reservoir Dogs (1992) up to Inglourious Basterds (2009). Menke was hired by Tarantino to edit Reservoir Dogs because (as he once explained in an interview) he wanted a woman who would “nurture” both him and his movie, rather than “shove their agenda or win their battles with me.” It is a telling statement that underscores both the gender-normative views that continue to prevail in Hollywood and the competitive masculinism that underpins the mythology of the auteur.

When she was conducting research into women editors of the studio era, Smyth discovered that their papers and cutting notes were often either not saved or not acquired by archives, unlike the documents of male directors and producers such as De Mille or David O. Selznick. This is particularly unfortunate because it was common in the 1920s and 1930s for directors to leave the cutting of their films to their editors. Over-investment in auteurism has tended to glorify those directors (such as John Ford) who liked to “cut in the camera,” producing a minimal amount of footage to ensure that a film could only be edited one way. But this was not the Hollywood norm. Editors of the period liked to call for multiple takes and versions because they offered greater variety and possibilities for creative storytelling. While filming The Ten Commandments (1956), for instance, De Mille used as many as twelve cameras for some scenes, producing in total over 100,000 feet of film. It then fell to Bauchens to pare down this pile of footage to an eighth of its size, a task made more complex by the film’s many matte shots and action sequences. De Mille later lauded her work as “the most difficult operation of editing in motion picture history,” serving a reminder that most films were and are products of intensive, creative collaboration.

Take the word “filmmaker”: When we use this word synonymously with “director,” we reinforce an individualist, auteur-centered model of filmmaking that mystifies and conceals the way films are actually made. Archival research into early cinema has given us a nuts-and-bolts view of filmmaking that is both enlightening and of practical use today. Early moviemaking was (in Stamp’s words) “a flexible enterprise” in which a person might perform a combination of creative tasks—acting, producing, writing, editing, and more—and the role of the director was not as clearly defined as it is today. These century-old practices hold a lesson for us: to help us rethink how we might watch and value films in a way that more fully takes account of an expanded, collective notion of authorship.

Friedrich’s vitally useful website on women editors, despite being a product of her own vision, embodies a similar, collective ethos. A great number of research assistants, scholars, translators, photographers, video documentarians, and other important enablers worked on this project—and are generously acknowledged. The core of the site contains profiles of nearly 140 editors worldwide, who are divided into two groups: women who were or are editors by profession; and those who have edited their own films. It is here that I learned about women such as Marie-Josèphe Yoyotte, the first black editor in French cinema, who cut The 400 Blows (François Truffaut, 1959); Lyudmila Feiginova, who edited most of Andrei Tarkovsky’s films, including Stalker (1979) and The Mirror (1975); and Françoise Bonnot (daughter of Jean-Pierre Melville’s editor, Monique Bonnot), who was a collaborator of director Costa-Gavras for four decades, and won an Oscar for editing Z (1969).

In addition to highlighting these figures, the website gives over space, in one of its appendices, for new editors to be added in collaborative fashion by readers. Friedrich has also created a companion video for the site that features sixty-five clips from movies edited by women, each excerpt about a minute long. Arranged chronologically, these clips showcase a range of films that cinephiles may not realize are edited (or co-edited) by women, including Jean Renoir’s The Rules of the Game (1939; edited by Marguerite Renoir), Victor Fleming’s The Wizard of Oz (1939; Blanche Sewell), Jean-Luc Godard’s Breathless (1960; Cécile Decugis), Ingmar Bergman’s Persona (1966; Ulla Ryghe), and George Lucas’s Star Wars (1977; Marcia Lucas).

With all of this, perhaps my favorite single page on Edited By is the main appendix, which houses links to articles on every woman featured on the site. To tumble into this rabbit hole of a page is to confront a mix of emotions: awe, on the one hand, at the sheer number and diversity of women editors, and their stories; and disquiet, on the other, that most of these names were new to me until recently, concealed from me by a film culture that has worked continuously, for over a century, to privilege the work of men over that of women.